I just love Swiss sheep. The mountains are cool, but when every steep hill is dotted with sheep wearing little bells, what could be better? 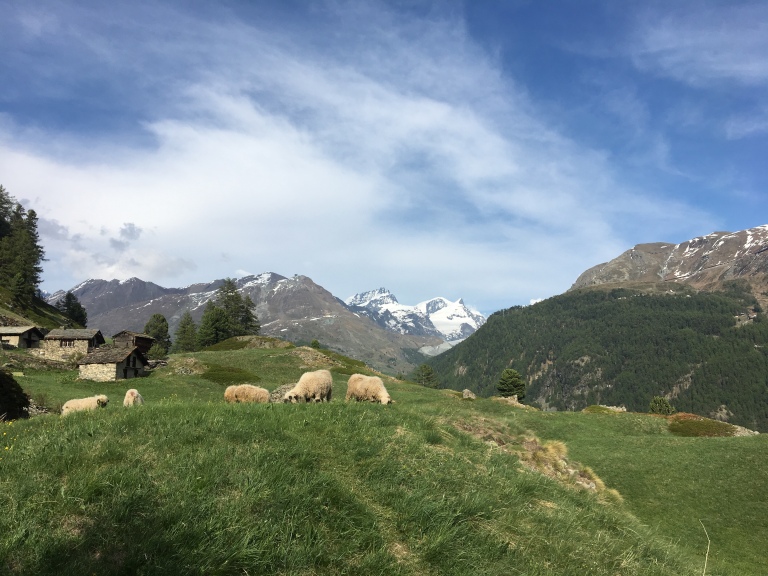 When I went to Zermatt a few summers ago, I had expected to spend two full days zipping around in the world’s greatest ski resort where the highest slopes that remain snowy all year round.

Instead, I spent most of my first day hanging out with sheep.

We had arrived during the hottest summer in dozens of years…seriously, we met a Swiss couple this summer who were still complaining about Summer 2017.

Summer skiing the next day…not even warm enough for coats

When my little traveling group showed up at our adorable hotel, Le Petit Charme Inn, our friendly host explained that the ski slopes were currently slush, so we should take a hike over the village to get a good view of the Matterhorn. The hike began at the edge of town and passed a few cows lazing in the grass before climbing pretty steeply through a dense forest. Olivia and I were seriously over the hike after five hundred feet that felt like approximately five miles.  We sat on A LOT of rocks while Dean (who’s basically Disney’s Tigger in human form) bounced around coaxing us to keep going.  That is until Olivia heard the twinkling of sheep bells in the distance.

Everywhere we went in Switzerland, every adorable sheep wore a little bell around its neck to help its shepherd keep track of his flock. The sound of a whole flock of sheep bells softly clinking in a field truly sets the soundtrack for an alpine fairytale.

The sound of bells also means there’s surely a group of cute animals just around the corner, which was definitely the case on our hike! The first tiny farm- livestock farms in Switzerland are about the size of my living room, nothing is Texas size- was just feet from the path, and we hurried to take picture of little black eared lambs next to their slate roofed barn. This was just the first group of sheep, though. We spent the rest of our hike hurrying from one little pasture to the next. Soon, without even remembering how “tired” we had been, we found ourselves above the tree line and with a spectacular view of the Matterhorn brooding over a field.

Olivia, Dean, and I spent some time (maybe the better part of an hour) taking selfies with sheep and absorbing the beautiful mountain-scape around us. We also found that, as always, you never know exactly where you’ll end up on vacation, and cute animals plus beautiful views equal extreme hiking endurance.

Walking around Zermatt after our hike, we were reminded of the afternoon we had spent with sheep and of the town’s inextricable relationship with the countryside around it. Everywhere we looked was wool and lambskin décor. Many of the cafes had draped sheep skins over chairs to keep customers warm as they ate outside, overlooking the (slushilly) snowcapped mountains. The use of these local wool products showcased regional heritage while creating a cozy, inviting look.

Back home, you can recreate this warm Swiss look with sheep skin throws available online or even relatively inexpensively from your local Ikea store.

You can also honor your new lamb friends by using faux lambskin.

Either way, paired with a warm wool blanket (in very Swiss bright red) your house will feel warm and inviting. 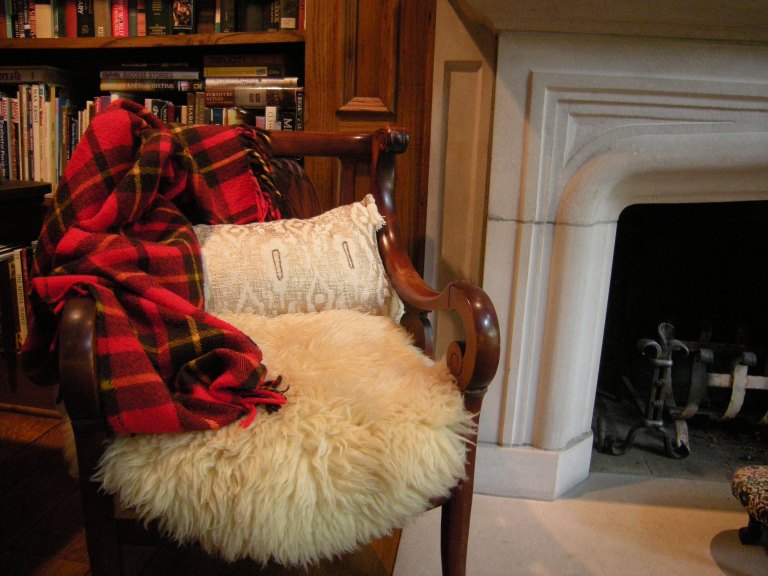 Creeping along the narrow road, we faced the unnerving reality that the other side of a steep mountain lay between us and a straight road. We had steered ourselves wrong. Well, maybe that way was right. Actually, it was definitely right and then left and then right again about fifty five times. Our rented Peugeot had just tackled half an alp. Olivia (my sister), Dean (her boyfriend), and I had accidentally found ourselves at the apex of Switzerland’s Furka Pass.

This adventure had begun in the picturesque ski town of Zermatt, Switzerland where we had spent the day summer skiing, and our destination was Germany’s Neuschwanstein Castle. Dean and I had spent the evening before our road trip choosing what appeared to be the most reasonable route for this road trip. We had eliminated any drives through Lichtenstein and Austria, which would have required the international driver’s licenses we neglected to apply for. Also, a highway passing through Italy before returning to Switzerland also seemed like a poor choice because, “why drive more miles and add more border crossings?” Therefore, we chose what looked like the least complicated path from Zermatt, through Zurich, then up to Germany.

The first leg of the journey wound through miniscule, post card towns where our chief complaint was the wildly fluctuating speed limit. Olivia road shotgun, reading aloud about our destination while I passed snacks of raspberries and tomatoes up to Dean, the driver. After meandering past dozens of chalets with dark wooden balconies and slate roofs, we were finally speeding through what seemed like an endless spring green valley when we noticed a street cutting back and forth up the rocky mountain parallel to our drive. We all agreed that would totally be a perfect road for the Grand Tour guys to tackle in one of their death defying challenges and breathed a sigh of relief when our highway continued without turning to toward that mountain.

Then we noticed the highway had started to climb almost imperceptibly off of the valley floor. Weird, but at least our road was wide and straight…until it wasn’t. We were about a third of the way up the mountain when we realized we were on that Grand Tour road. Our chosen route had switched back to snake steeply up the mountain. 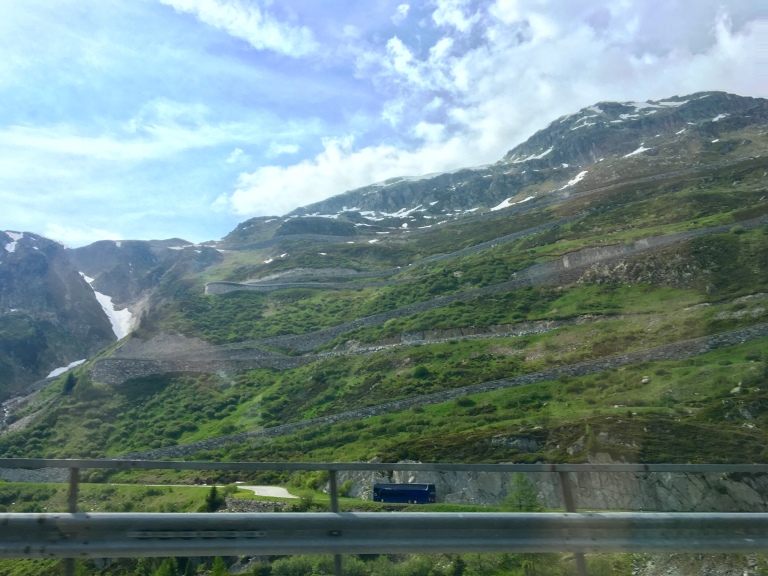 My GPS resembled a bowl of spaghetti noodles, and every few feet, we saw memorial markers near the sheer drop off the side of the single lane road. 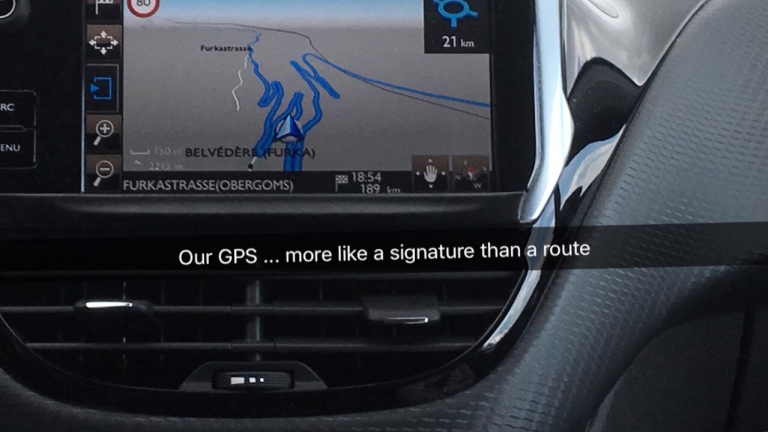 To make matters worse, we discovered that what would only make sense as a one lane road was carrying two way traffic. At every one of the dozen or so switchbacks, we had to wait on the far side of the street with only inches between our tires and the cliff while oncoming cars inched past. Visions of Bolivia’s “Death Road” filled my imagination as tension grew in the car. 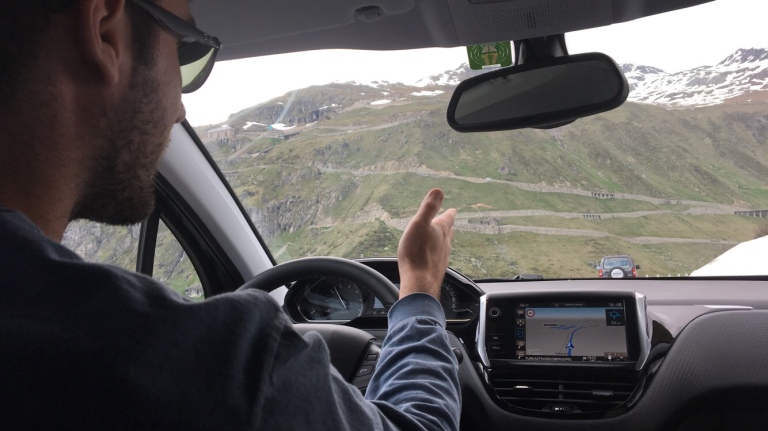 Olivia and I found Dean’s nervous laughter abrasive in the light of the “life or death” experience we believed we were facing. Despite the temperature drop outside as we neared the snow line, my right hand was sweating profusely from its grip on the door handle, but we finally reached the top. Focusing through Olivia’s and my ceaseless warnings to “watch out for that car!,” and “stay away from this cliff,” Dean had gotten us safely to the glacial peak of an Alp. At that moment, I realized all Olivia and I could really do as passengers was trust that our driver would navigate us carefully to the valley on the other side.

Descent from the mountain was no less stressful, but Dean stayed focused, avoiding cars and cliffs, both inches from the sides of the car and often at the same time. Once we reached flat ground, Dean and I switched drivers, so he could basically rest off the effects of shock and a tension headache in the backseat.

I don’t think any of us will forget this alpine pass, known previously only from action movies, such as James Bond. I also learned the importance of zooming in on Google Maps…or better yet, checking with your hotel’s staff for driving directions. More importantly, I learned the importance of traveling with people you can trust in stressful situations.  Travel challenges us as we face the unexpected.  You can’t plan for every adventure, and you never know what’s around the next corner, but you can choose your travel companions.